Cooking without Electricity: A Number 10 Can Stove

This is the sixth post in the series Cooking without Electricity.  I really enjoy experimenting with different ways to cook without heating up my kitchen.

I have been wanting to make a small stove top with a number 10 can for a while now.  I saw this posted on another blog a few years ago and added it to my emergency binder.  Here is the original post that I saw: Tin Can Stove.

This post is my interpretation of  cooking with a number 10 can and the lessons I learned with this method.

Let's start by making the stove. 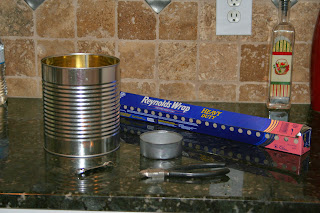 Start with a used number 10 can that has been washed.  For the number 10 can, you will need tin snips.  The second can in the picture is a tuna can.  It will hold the heat source. The aluminum foil will be used to control the flame.

Start by making four or five holes in the can for the chimney. A simple, old fashioned can opener works well for this purpose. 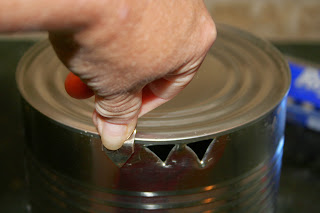 Next, make a 'door' opening for access to the flame.  The directions in the original post said to make two cuts in the can, 3 inches long and 3 1/2 inches apart.  That is what I did.  I broke the tin snips in the first picture (they were really old) so I had to get new ones. Be sure to wear eye protection when cutting metal with the tin snips. 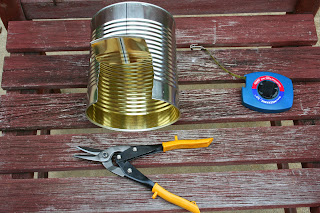 Make the heat source.  Begin by cutting the top of a cardboard box into strips. Use corrugated cardboard and cut across it so the holes show. The strips should be about the same width as the tuna can. 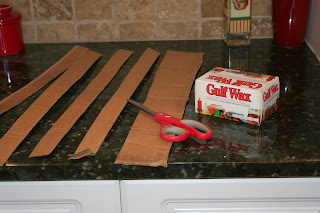 Then, roll the strips tightly, and place in the tuna can. 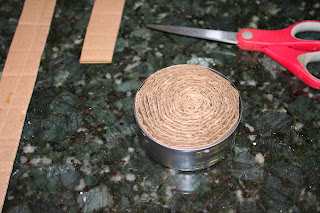 Melt some paraffin and pour into the tuna can.  The wax is used as a the fuel, the cardboard as the wick.   Please be careful when heating the wax, use a double boiler, follow the safety precautions on the package of wax, and have a fire extinguisher handy.

As an alternative, you can cut some paraffin and melt it on top of the cardboard. Light the cardboard and then place a piece of paraffin on top. Do not do this inside. Use reasonable safety procedures. For example, I lit it on my grill  just for the added safety. 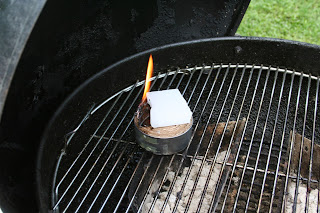 I had a bit of difficulty getting the cardboard to light. But, once it started going the wax melted easily.  I added two pieces of paraffin, the equivalent of one of the bars in the box of wax.

Be particularly careful with this stage of the project. After I lit the cardboard and melted the wax, I could not blow it out.  I had to get another can that was slightly bigger to cover the lit wax and cardboard in the tuna can. This did smother the flame. One of my key take away's from this was to prepare a simple cover capable of smothering the flame and keep it close to the tuna can.

When ready to cook, gather all the supplies. Notice the cover for the tuna can in the picture? Before beginning to actually cook, you will need to create a damper so you can control the flame.  I used heavy duty aluminum foil. Cut a sheet about 18 x 15 and fold one end at the three inch mark.  Continue folding over until all the foil is used. 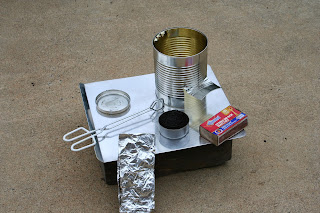 Since I wasn't familiar with this method of cooking, I wanted to keep the first trial simple. Toward that end, I decided to just boil water for instant potatoes.  Since I wasn't going to cook directly on the can, I used a can opener to remove the top of the stove.

I must reiterate the need to use common sense here.  I put this stove on a cookie sheet that was placed on a cinder block.  The block is on my patio.  The block was well away from anything that could catch fire. This type of stove should never be used indoors.  Have a fire extinguisher handy when you light the flame.

I lit the cardboard, and placed a number 10 can on top of it. Then I placed a pan of water on top of the can.  (I soaped the bottom of the pot to make it easier to clean when I was finished.) 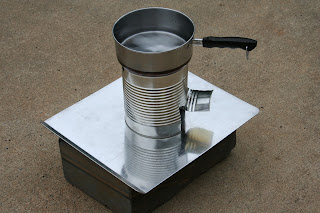 In this picture you can see the flame. 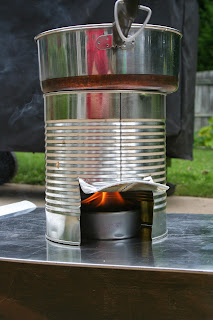 It only took about 2 1/2 minutes for the water to start boiling!

A few lessons I learned in making and using this stove:

I just got a Kelly Kettle so expect a post on that soon!

Have you ever used this method to cook with?  If you have, I would love to hear your review and lessons learned in the comments!

If you liked this post, you may also like other posts in the Cooking Without Electricity series:

Posted by Kate at 9:32 PM
Email ThisBlogThis!Share to TwitterShare to FacebookShare to Pinterest
Topics: Cooking without Electricity