This post is the second in the series: Cooking without Electricity.

Yes, it is possible to cook in a cardboard box! I first learned of this technique two years ago but never had a chance to make or use a cardboard box oven. I saw the instructions on the blog Safely Gathered In. This link will take you to the original post. Today, I'll describe how I made this oven (using the guidelines from Safely Gathered In) and the lessons I learned.

To start, you will need the following items: 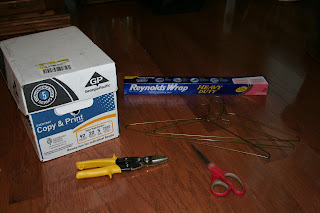 Start by lining the box with aluminum foil. Smooth out the foil as much as possible because if you bunch it up, the top won't fit well.  If necessary, use some staples to keep the foil from moving around. 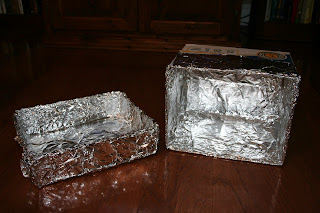 Next, straighten out the three coat hangers. These will be the oven rack.  Poke a hole in the side of the box to insert the coat hanger .(I just used the hanger to poke the hole.)  Aim for about half way down the box.  I measured the center point on the box and then inserted the hanger about 3/4" up from the center. 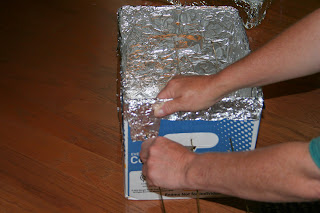 Now, secure the hangers and clip off the excess with the wire cutters.  I wrapped mine as shown below. 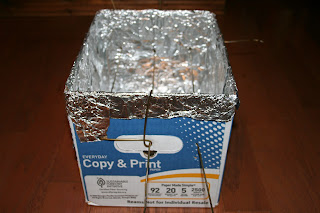 Tuck the ends under each other.  Bend the final hanger the other way and tuck it under the first two.  Here is a picture of what it looked like when I was done. 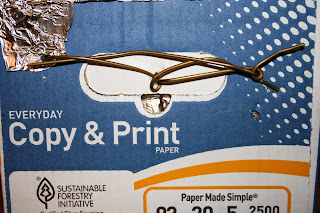 See the half-circle hole in the box above the 'in' in print?  I poked a hole in the aluminum foil here to allow gases to escape when cooking.  The final product looked like this. 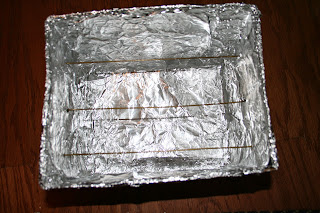 I made a coffee cake from a box mix of Pillsbury Quick Bread. I just followed the recipe on the side of the box. 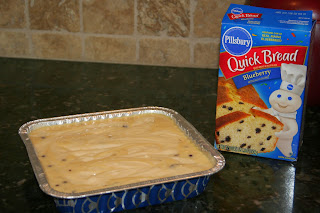 The directions said to bake the coffee cake at 375 degrees. I used charcoal to actually cook the cake.  I read on the Internet a few years ago (on a few different Internet sites) that one briquette heats to about 40 degrees.  So, I placed nine briquettes in an aluminum foil pan and lit the charcoal. For safety sake, I lit the charcoal on my grill rather than on the ground. 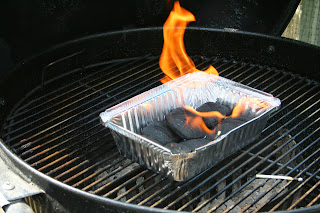 I had a difficult time geting the charcoal to light so I added a few more briquettes and tried again.  The second time did the trick.  I actually ended up with 11 briquettes. When the charcoal was ready, I placed the pan in the oven - sliding it in between the hangers.  If you use this technique be careful not to spill the charcoal. 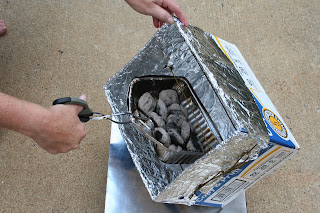 A few quick notes on safety:

Here is the coffee cake going in to the oven. 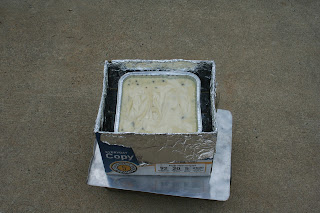 Place the top on the box and let it bake. 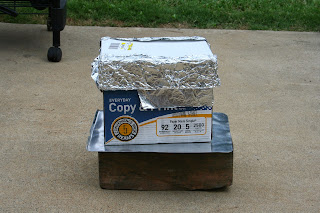 And, there you have it! Coffee cake without using your oven! 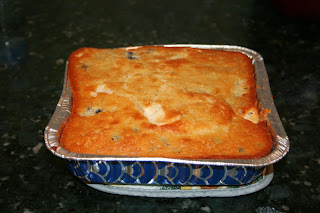 Since this was the first time I tried cooking anything in a cardboard box, I have noted some lessons learned:

Cooking in a cardboard box may not be nearly as efficient or effective as using the kitchen oven, but it does give you a quick, easy way to cook when other options just aren't available.  A great alternative in an emergency that can be used in the summer or winter.

Posted by Kate at 11:29 PM
Email ThisBlogThis!Share to TwitterShare to FacebookShare to Pinterest
Topics: Cooking without Electricity