I am almost finished putting in my summer garden. So I thought I would give you an update on what went in this year: 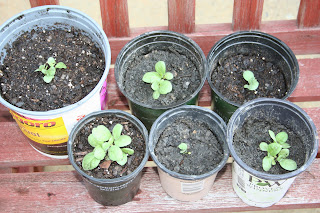 ﻿Last week, I also harvested the onions I planted in early spring. This is year two for these onions. I planted seeds last year, then stored the tiny onions (called sets) over winter. I put the sets out in late February.  I got 46 - plenty to last all year for our family.  I planted a day neutral hybrid called Candy.  Very easy to grow and my husband says quite tasty.  I will dry them and make onion powder.  Here they are waiting their turn in the dehydrator on my dining room table 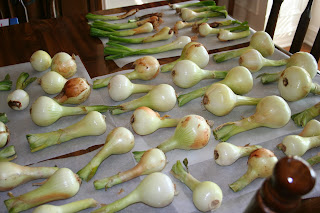 I will be sure to take pictures and post updates as the summer progresses!
Posted by Kate at 8:04 PM
Email ThisBlogThis!Share to TwitterShare to FacebookShare to Pinterest
Topics: Gardening

Kate
My name is Kate and I have always thought I was born in the wrong century. Maybe that is why I feel so close to my ancestors. Two of my great- great-grandmothers are named Elizabeth. I often call on them to whisper guidance in my ear on how to live a self reliant life, without the use of electricity. So come along with me and together we'll learn about old-fashioned, frugal ways of living that have stood the test of time - the non-electric way!